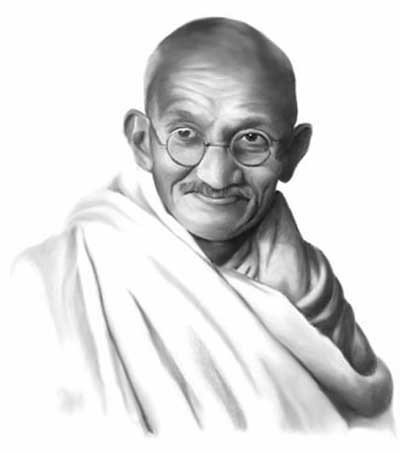 The author, Rajan Chopra, is an Executive Coach, Advisor and Strategist to S&P 500 companies, entrepreneurs and investment professionals.

Gandhi Was A Disruptor!

Yes, the Mahatma was the granddaddy, grand master of disruption on the grandest scale.

To many hundreds of millions of people, perhaps even billions, he’s known as the humble, spiritual man who defeated the British empire and secured India’s independence. Without armed revolution or war.

He did what had never been done before in the annals of history – liberated a nation from a mighty colonial empire by non-violent means. And thereby disrupted political and military doctrines forever.

To this day people all over the world still marvel at what this man accomplished with his vision, leadership, unrelenting perseverance and humility.  He has inspired millions including other great world leaders that followed such as Dr. Martin Luther King, Nelson Mandela and Barack Obama.

Upon his death, almost seventy years ago, hundreds of thousands came to the funeral where one broadcaster eloquently observed:

“…the object of this massive tribute, Mahatma Gandhi, died as he had always lived. A private man, without wealth, without property, without official title or office. He was not a commander of armies nor a ruler of vast lands. He could not boast of any scientific achievement or artistic gift. Yet men, governments, dignitaries from all over the world have joined hands and come to pay homage to this brown man in a loin cloth who led his country to freedom.  Mahatma Gandhi has become the spokesman for the conscience of all mankind. He made humility and simple truth more powerful than military empires…”

The British ruled India for 200 years.  Through a highly organized administration and military force the rulers had an effective stronghold on governing and ruling a nation of 350 million people. The Indians were exploited, divided and conquered to benefit the British empire.  It was British rule.  And the Indians wanted freedom from an oppressive foreign power. There were several national uprisings and movements to free India from the British.  And each time they were quashed by the mighty British empire.

Earlier in his life Gandhi studied law in England and later moved to South Africa where he found oppressive laws against the minority Indians resident there. He chose to fight those unjust laws and deployed a strategy of “non-violent civil disobedience” against the authorities with considerable success.  This experience led him to think big – freedom of India from the British using a similar strategy.

Gandhi understood that an armed revolution against the British would not succeed in liberating India.  Besides it would cause much bloodshed.  He also knew that the British depended heavily on exploitation of the vast Indian workforce they employed to profit from the trade-and-rule doctrine of their colonization of India.

What could the freedom seekers possibly do?

Gandhi developed a thesis:  100,000 armed British soldiers cannot control 350 million people if the ruled refused to comply with the ruler’s commands. That is, through non-violent, non-cooperation the British colonization in India would grind to a halt and the rulers will ultimately see the futility of their occupation of India.

He understood the psyche of the Indian people. He also knew the limitations of the rulers.  He led by example. Lived humbly. Traveled extensively. Became one with the masses. Stood up to the British authorities at every instance. Organized nationwide general strikes by workers disguised as “a day of prayer and fasting” which paralyzed the nation. He provoked the British with mass marches such as the famous “salt march” to break the symbolic control of the rulers. He was jailed several times. And used each such instance to his advantage to win more hearts and minds and further antagonize the British.

He persevered for almost three decades to rouse the collective will of the people to engage in non-violent-civil-disobedience until the day finally arrived that the British finally saw the futility of their continued attempt to rule India.

India became an independent nation, and the world’s largest democracy, on August 15, 1947.

What is not so obvious is how great leaders accept and adapt to the factual or perceived obstacle or weakness and convert it into a great tool to accomplish the outcome sought.  In this instance – the freedom of India.

Disruptive thinking at its best!